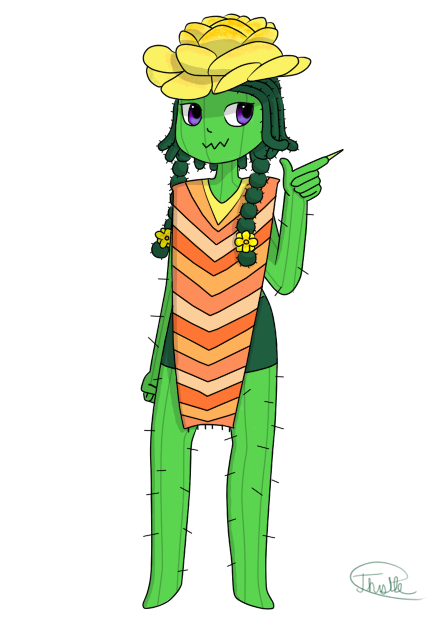 Can find the original upload and artist at http://fav.me/dbyr5a7

BASICS
Name: Rosamarillo/”Ro”
Gender: Female
Species: Elemental - Florid subspecie
​APPEARANCE
Riding atop her longhorn landshark steed is a peculiar figure wrapped in a multicolored cloak. Atop her head blooms a yellow rose, providing her much needed shade from the Exodus Desert sun. Her pigtails, made out of several sphere-like cacti and vine like bits, bounce as she soars through the air on her mighty steed. Her arms end in prickly erupting from her prickly green arm. Upon further inspection, she is some sort of cactus-based humanoid, standing about 4’2” in height. She points at the guards, plugging them with needles with every jerk of her arm.
ABILITIES
WEAKNESSES
BACKGROUND
Near a desert village in Exodus, a young girl would constantly read to a cactus. The kid would pretend the cactus was her friend. Every day over the course of several years, she would read to it. In turn, the cactus would provide her shade and company - ever silent, ever listening. Even as an adolescent, the girl would do everything around the cactus. Practicing her spells, sharing romantic puppy love underneath the shade of this cactus. As the young girl grew into a young woman, married to a merchant, she took her children out to play near the cactus.

About this time, the cactus had reached the stage called a “bloom” - where a Florid starts developing sentience. However, the cactus simply did not wish to move. It was happy.

However, as it developed senses, it started noticing things. Like how the woman was coming with various marks on her face. The children would often be crying or clinging to their mother. One day, the woman and the children stopped coming. That was when the cactus made its move.

It entered the village. She had heard the description of the home, and found her way to it. Being so connected to the earth, she noted recently dug, unmarked graves, and immediately knew who was in them. Notably, the husband was not among them. Listening to the other villagers, apparently the merchant had left on a caravan trip...supposedly with his family. For a very long time.

Joining a gang of bandits who preyed upon various caravans - The Holdem Studs, she quickly built up experience and a reputation for being a fearsome bandit herself, utilizing some of the spells her dead friend had inadvertently taught her, infused her with.

In her adventures, she was able to accomplish several larger than life feats, such as taming a fiercesome beast, a landshark they called “The Sand Cyclone.” She named it T-Bone, after managing to tame it via riding it around.

She has finally caught wind of the name of her target - a merchant family named “Roth.” In that family, she would find the bastard who had taken her first friend.

​As a result of having an odd upbringing, Rosamarillo clings closely to anybody who will acknowledge her, forming a dependent clingy relationship with them, which is why she continuously runs with the Holdem Studs in spite of them only using her for her skill as a bandit
EXTRAS
MC9: Adventure! Winner: FINAL BATTLE - MIGHTY SAVIOR VERDE ROBO!? - http://fav.me/dc1u9d8

Credit to picture goes to Thistle Bloom at https://thistlebloom.deviantart.com/