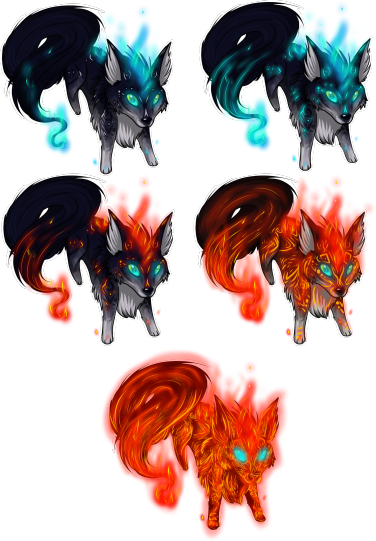 Artwork copyright Kirra, Dawnfeather, and Verridith.
BASICS
Name: Cynzalia
Species: Vystrian Wolf
Gender: Female
APPEARANCE
A wolf rivaling the size of some horses, Cynzalia’s black fur with tranquil, wispy blue flame flowing from her eyes, forehead, and the ends of tails conceals an even more dangerous beast within her. On her back are two bumps covered with a similar flame - the painful remnants of her once proud wings. Her gray-blue eyes are often found glaring at some wolf or another - her fangs bared in a threatening snarl.

When angered enough, her entire body seems to be engulfed red hot flame - eyes glowing with an eerie brilliant blue.
ABILITIES
WEAKNESSES
BACKGROUND
Having been incorporated into the Vehn pack after having been a wanderer, Cynzalia has a rough relationship with her fellow pack members. The pack can be quite divided on what to think of her, though none doubt her fierce devotion to the Vehn out of gratitude for taking her in. Her burned off wings are symbol of her loyalty, a sign of her respect for the traditions of the Vehn.

A fierce hothead, Cynzalia tends to be rather disagreeable and bristly. Therefore, she has few friends. But in times of war, Cynzalia can be found leading the charge.

In addition to her rage, Cynzalia is known for moments of insecurity among her closest of friends, having doubts about her station as alphess. She is far from uninformed of what other wolves think of her. However, her relationship with Fim, the Vehn alpha, reflects the two things needed for leadership - a cool head and fiery ambition. As such, her position is respected, and she manages to keep up a facade of brash confidence befitting her element.

Though she denies it, she is quite bitter and pained over the loss of her wings, even after all these years - a faint throb reminds her of what she gave up, and acts as a source of her bitterness, which she uses to fuel her flame - both proverbially and literally.

She is also noted for her rather crass and informal way of speaking. As she assumed the title of alphess, her words were noted: "That's right, I'm now top bitch of this dogpile!"